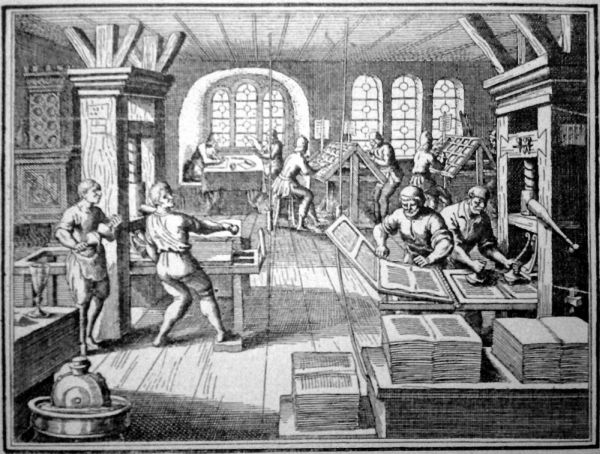 Anyway, the fact that books could be produced at an ever-decreasing cost, that they could circulate as never before and that a larger and larger amount of people could have access to the opportunity of knowledge and the pleasure of reading, could have been quite obvious to Gutenberg, as probably was the idea that such an unprecedented availability of knowledge would have had momentous consequences in the European culture. But there is still another set of outcomes that he couldn’t possibly forecast: modern readers and the publishing industry.

To clarify what I mean, let’s make another step back in time and have a look at a great medieval treasure, Petrarch’s personal library. This copious collection, a true wonder of its time, when ordinary people and erudites alike marveled at the very fact that a single man could possess, let alone read, so many books, consisted of about two hundred codices (that is, volumes). Sure enough, many of them contained two or more titles, thus this library contained the equivalent of, roughly speaking, five or six hundred modern books: still, a rather unimpressive feat, by any modern parameter. The main difference between Petrarch’s library and the collection of cheap paperbacks on the shelves of an average college student is not one of quantity, but of quality. With this, I don’t want to say that Petrarch’s books were, by any means, better, more profound or at any rate superior to the ones of our friend in college: in the latter’s collection books such as the Critique of Pure Reason, the Karamazov Brothers and even Petrarch’s Sonnets, might be found, as far as we know. I mean that they are different objects and that such a qualitative difference originates from a quantitative process.

A novel, like the Karamazov, or a modern philosophical treatise, are cultural products that couldn’t have existed without the changes in production and circulation of written media originated by the printed press. To write novels, writers must have an ideal reader to address (a notion derived from Eco’s model reader), whom they will never personally know, but who is the final recipient of the novel and, hopefully, willing to pay to read it. Similarly, a modern philosophical treatise or, even more, an essay, is something made of other books, the result of an ongoing academic debate that couldn’t happen without the large access and intense production of questions, confutations and vindications made possible by printed media. The same goes for a modern edition of Petrarch’s sonnets, which is edited and arranged according to conventions and approaches that, too, have their roots in a world were the written word is mostly and industrial product.

Because books, and therefore modern culture are, first and foremost, an industrial product. Indeed, they may have been the first truly industrial product in Western history, as the main feature of the printing press is the production of a potentially unlimited amount of indistinguishable copies of a given product, through the use of a machine and standardized labor. Just as an example, the codexes of the Petrarchan library were an artisanal product, the result of the serendipitous compresence of some texts to be copied and enough paper to do it. Each codex was unique and would have found itself completely out of place in both phases, production and distribution, of an industrial system. By the way, this simple fact should be sufficient to settle, once and for all, the tedious dispute between humanists and technophiles, as humanist culture is a technological product and modern technological means owe their very origin to a very humanistic need, the need to distribute and debate ideas, knowledge, stories.

Industrial production, however, is not only defined as a way to make things but also as a specific form of distribution, where supply and demand can meet on a regular basis around standardized products, with a stable price and a well-defined system of commercial outlets. The publishing industry, as we know it today, has established itself on the two pillars of a system of production and one of distribution. As a result, publishers became the gatekeepers between authors and readers: they selected the books that they deemed worthy of being published and proposed them to the readers, using their capital of goodwill as a guarantee of quality. It is within this framework that the model reader of modern books has arisen and, with it, the peculiar kinds of cultural product addressed to this reader.

In these days, we are experiencing, for the first time in about five centuries, a collective “Gutenberg moment”. Digital publishing is to the traditional publishing industry at least as disruptive as the printing press had been to hand-written manuscripts and medieval libraries. Digital books are, in a sense, the ultimate industrial product: a digital object can be replicated indefinitely with a negligible expenditure of resources, to a degree of efficiency that no physical object can possibly attain. This happens without the need of complicated and costly machinery: if the cost of production of, say, a paperclip is really low, the industrial facilities that allow this production are, in themselves, far from being backyard operations; on the other hand, to produce a digital book, one needs just a very common piece of equipment such a laptop, Internet access and a publishing platform. In other words, the ultimate degree of efficiency in industrial production leads to the irrelevance of that industry itself, as publishers have no more a gate to keep, regarding the access to production.

Along with this function, another important one goes away: as gatekeepers of the printing press, publishers operated and ex-ante selection, based on quality, marketability, cultural value or whatever criterion they adopted, including personal whims. Now, an unprecedented amount of books is being published each and every day: if the five hundred titles of Petrarchan times are too few for the life of a modern reader, the 1,000 new books published every day in the US alone are obviously too much for any reader, of even community of readers, and self-publishing services are just going to add more and more to that figure.

This means that no selection ex-ante has any sense, because the sheer output of traditional publishing industry grants that an overwhelming majority of titles gets unnoticed by traditional media, bookstore chains, literary critics and all the other typical interfaces between the publishing industry and readers.Here comes the other disruptive effect of digital technology: if the traditional distribution system is based on a number of centralized outlets where readers make their choices, digital distribution is completely decentralized and, once again, almost without costs. Anyway, it seems that, in these years, little has changed: just as e-books are (mostly) the same of traditional ones, with the only difference that they are read on a monitor and not on paper, so the book market has remained as it was. A lot of cheap printed paper, a bunch of large-selling titles, a few big players that gobble up most of the market and many little ones hoping to have a chance.

But this is just the surface of what’s happening. We should, however, put these things into perspective, and try to look a bit further: just as digital books can (and will) be different from paper ones, so the distribution system is going to change radically. The point is that, while the digitization of written media has introduced an unprecedented level of efficiency and accessibility, once again these quantitative changes are producing a leap in quality: digital books are definitely going to become new objects. The interesting fact is that this peak in industrial efficiency goes hand in hand with new possibilities of craftsmanship: digital objects can be modified, expanded, customized, built upon, and this can originate a whole world of new codexes.

While there is much to be said on the new forms that books can assume and the underlying technological choices that may steer this future evolution one way or another, this should have to wait for a future post. Here, there is room enough for just a passing remark: publishers are becoming obsolete, at least in their traditional role. Authors, editorial professionals, readers and the many other stakeholders intervening in the complex processes that take place between the moment when a book is written and the many times that it is read, have an open space in front of them. A space where new relations and alliances will be formed, where the fortune of a book will necessarily be decided somewhere ex post, in the many things that may happen when a book is read. The future survival of books, their possibility to thrive in a digital world and to continue being an essential part of our lives, depends on their ability to finally become what they always have been: fully social objects.